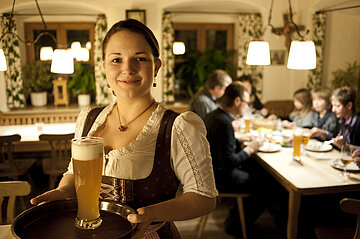 Welcome to the beer homeland! In the Altmühltal Nature Park, you will find plenty of small and larger regional breweries with their own specialities. Obviously, they are produced according to the rigorous Bavarian purity regulations.

Hop, water, malt and yeast are the only ingredients allowed for beer brewing in Germany. In the Altmühltal Nature Park hop and barley of highest quality grow directly on the spot. A great taste variety lies in these few ingredients, which is disclosed by the brewers of the region: each master brewer has his own recipes and secrets, from the oldest monastery brewery of the world in Weltenburg to the local bio brewery. Maybe you could try and guess them during brewery guided tours or beer tastings. Or you can simply enjoy these brewers’ special beers with tasteful traditional delicacies.

Moreover, the trees growing in the Altmühltal Nature Park produce excellent fruits that are used by the region distillers for high-quality distillates and aromatic liquors.