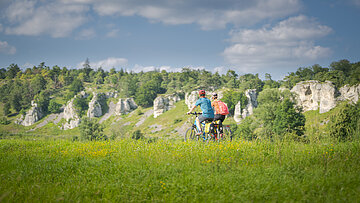 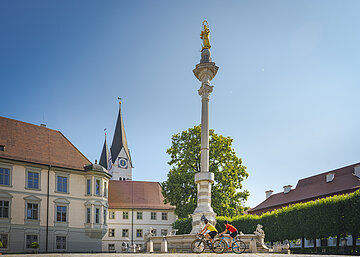 ALTMÜHLTAL NATURE PARK (Bavaria) - Many bikers went along this almost level route as children, together with their parents. At those times they were fascinated by climbers ascending the Burgsteinfelsen rocks, daydreamt thrilling adventures in the castle on the hillside, observed amused flocks of sheep grazing peacefully on fields dotted with junipers and tasted delicious snacks in open-air beer gardens. Now they are adult and live the same experiences on the Altmühltal Bike Trail (Altmühltal-Radweg) with their own children. The long-distance bike trail that winds its way for 167 km through the Altmühltal Nature Park got 40 in 2019 and it still is the ideal route for funny family bike tours. The Altmühltal Bike Trail is a "multigenerational" route suitable to the whole family: its level path is mostly separated from roads and even children can ride along it easily. In addition, those who need some help can use an e-bike: the Altmühltal Nature Park is also a first-class "e-bike region" with a close-knit network of charging stations and electric bike rentals.

The Altmühltal-Radweg leads to ever-changing landscapes and cosy towns. The bike trail enters the Altmühltal Nature Park in Gunzenhausen and follows the Altmühl River to the spa town of Treuchtlingen. Then it continues to Pappenheim, where it is possible to visit the mighty castle that overhangs the town, with its chapel, its watchtower and its torture chamber. Then, the path follows the sweet meanders of the Altmühl River along the rock formations called "Twelve Apostles" (Zwölf Apostel) near Solnhofen and the Burgsteinfelsen rocks near Dollnstein. The trail reaches Eichstätt, too: this elegant town still testifies to the century-old domination of the local Prince-Bishops with the mighty Willibaldsburg castle and the elegant Baroque ensemble of its centre. Leaving Eichstätt, the route follows the river among picturesque meadows with junipers bushes and rocky walls. At Kinding, cyclists can take a swimming stop at the small Kratzmühlsee lake and refresh before reaching Beilngries. As testified to by many Baroque buildings, Eichstätt’s Prince-Bishops have dominated this town, too. Thanks to the town’s peculiar architecture and the lively local gastronomy, a typical Mediterranean atmosphere characterizes Beilngries. In Dietfurt, the Altmühl River runs into the Main-Danube Canal (Main-Donau-Kanal): from here, the Altmühltal-Radweg follows the canal until Riedenburg, the "town with three castles" and ends in Kelheim. The ancient Wittelsbach town is overlooked by the majestic monument called "Befreiungshalle" (Hall of Liberation), which was built by King Ludwig I at the end of the wars against Napoleon.

If you would like to ride on the Altmühltal Bike Trail, the tour operators and Tourist offices of the region are ideal reference points to you. They offer both tailor-made tours including overnight stay and luggage transportation and tours on alternative trails, e.g. on the Jura uplands or in the Altmühltal’s side valleys. For instance, the themed tours offered by "Donaubike" give the opportunity of discovering the landscape, the culture and the gastronomic specialties of the region together with local guides. These tours are best suited not only to solo travellers, but also to families and groups, and can be planned according to the participants’ individual needs. In addition, it is possible to hire bikes and e-bikes on the spot (www.donaubike.de).