Back to the Age of the Romans and the Bavarians 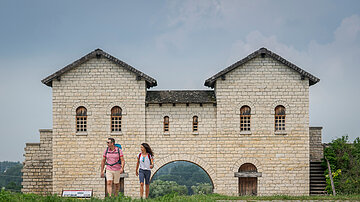 A Bavarian smith works the red-hot iron with great skilfulness and an enchanted public observes him at a safe distance, as spurs of it are squirting out from the crucible. He is just one of the many Bavarian handicraftsmen that show their elegant manual skill during the historical festival at the "Römer und Bajuwaren Museum" (Museumsfest, Kipfenberg castle). This event brings the Late Antiquity and the early Middles Ages back to life. The museum, that celebrated the 20th anniversary of its foundation in 2019, hosts also a true rarity: the mortal remains of the warrior considered the ancestor of the present Bavarian people. He lived in the 5th century and his grave was discovered in 1990 in Kemathen, a hamlet of Kipfenberg. The precious finds uncovered during the excavations and the reconstruction of his funeral site, faithful to the original, are the core of the museum exhibition. The Bavarian age comes back to life also in the Museum Festival. Besides displays of handicraftsman skilfulness as bronze fusion and basket plaiting, during this event also workshops devoted to children and gastronomic events are arranged. The "Legio III Italica Pia Fidelis" takes part in this important festival, too: in fact, many traces of the Roman domination have been uncovered here in Kipfenberg. About 2,000 years ago, most of today’s Altmühltal Nature Park belonged to the Roman Empire and the Limes, a UNESCO World Heritage Site since 2005, crossed the region. The reconstructions of military encampments and watchtowers and the extraordinary finds exhibited at the Roman museums in the Altmühltal region make it possible to better know the Roman and German way of living.

In the Altmühltal Nature Park history enthusiasts can make a journey through time and go back to Antiquity with the guided tours offered in the region. Eining, near Bad Gögging, hosts the largest Roman Festival of Bavaria ("Salve Abusina") with thrilling gladiator fights, handicraft products and many other activities for the whole family. Weißenburg is a Roman city par excellence, with the rebuilt North tower of the "Biriciana" castrum, the Roman thermae and the "RömerMuseum". Here, visitors can learn more about the everyday life of ancient Romans thanks to special guided tours: during the "RömerVisionen" tours, for instance, they are in the company of the Roman equestrian soldier Lucius or of his wife Mania. In Kipfenberg families and groups can even put themselves in the ancient Romans’ shoes ("Römer auf Zeit") with a program that involves in the encampment life along the Limes, Roman cuisine and games of the Roman age.

Those who want to be on the Romans’ trail in the Altmühltal Nature Park can do it also on foot or by bike. The Limes bike trail "Limes-Radweg" connects Gunzen¬hausen to Weißenburg and Kipfenberg, following the Danube River, while the German Limes hiking trail "Limeswanderweg" follows the layout of the ancient "wall" that has been built along the former border of the Roman Empire in the Nature Park.

The audio guides "Limestour" (in German) supply important information on the main points of interest concerning Roman history along these trails (audioguide.naturpark-altmuehltal.de/tour/limestour-6).

The updated calendar of guided tours and themed events can be requested at info@naturpark-altmuehltal.de.