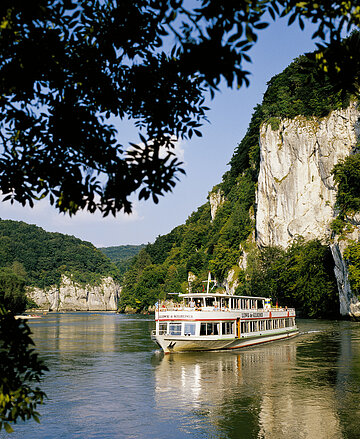 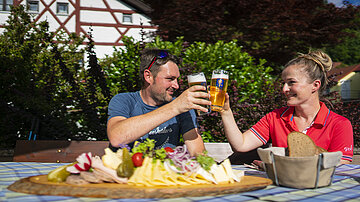 Nature, Culture and Relax in the Heart of Bavaria

The Altmühltal Nature Park lies about 100 km north of Munich, Bavaria’s capital, and is one of Germany’s largest nature parks. Here, the Altmühl River gently meanders through a region of valleys and hills before joining the Main-Danube canal, which is regularly travelled also by passenger boats from Berching to Kelheim. The Park’s beautiful countryside and the great variety of its landscape make it a hiker, cyclist and canoer’s heaven… and also an ideal place for those who love outdoor activities in general.

The Altmühltal Nature Park is one of the most beloved holiday regions in Bavaria: here, the tourist appreciates above all its unmistakeable and ever-changing landscape characterized by the enchanting Altmühl River, beautiful juniper heathlands, impressive limestone rock formations, the gorgeous Danube rock gorge called "Donaudurchbruch", the peculiar stone gullies (Steinerne Rinnen) as well as its wide and verdant forests.

History, Culture and Tradition
The Altmühltal Nature Park offers plenty of interesting attractions dating back to the most different ages, beginning from the Roman and Celtic Ages. When strolling along Medieval alleys, you can admire magnificent Baroque and Renaissance buildings erected by the Prince-Bishops of Eichstätt, as well as works of modern architecture. The extraordinary museums of the region exhibit archaeological and natural history treasures as well as fine works of art and collections prepared with great accuracy.

The Altmühltal Nature Park is also crossed by the upper Germanic-Rhaetian Limes, the ancient borderline of the Roman Empire that has been declared a UNESCO World Heritage Site.

In this region, people know how to keep history alive with all of its thousands of stories. Besides interesting museums on local history and traditions, the traditional festivals and celebrations are excellent chances not to forget the ancient customs and to show off the typical local costumes. Here, also Roman history comes back to life in the many events that liven up the Nature Park all year round.

A World in Stone
More than 900 different species of petrified animals and plants have already been uncovered in the Altmühltal Nature Park. This fossiliferous region is world-famous as "homeland of the Archaeopteryx": actually, all of the fossils of the so-called "primeval bird" have been found in the Altmühltal Nature Park only. Therefore, the region is like an open window on the mysterious Jurassic world: here you can go on a thrilling journey through Earth’s geology in fantastic museums and even go fossil hunting in some of the region’s stone quarries open to the public.

Wellness
In Treuchtlingen’s Altmühltherme, the beneficial Jura thermal water flows out from two certified springs. The Limes-Therme in Bad Gögging, at the other end of the Park, is a thermal spa of excellence specialised in mud application. Moreover, you can also find the Kaiser-Therme in Bad Abbach (not far from the Altmühltal Nature Park) with their thermal sulphurous water. Besides programmes focussing on treatment and prevention, these three thermal centres offer wellness and well-being programmes with massages and beauty packages as well as wide and modern areas hosting different kinds of sauna and salt grottos.

The Right Accommodation
In the Altmühltal Nature Park, you can find hotels, guesthouses and holiday apartments both in the centre of the towns and close to nature. There are also comfortable walkers and cyclist's accommodation facilities directly on the long-distance cycle route Altmühltal-Radweg and the hiking route Altmühltal-Panoramaweg. Here, grown-ups and little ones will find the right atmosphere for a family holiday, while those who are looking for strict contact with nature will live special moments under the starry sky. In the region, RV tourists will have plenty of choice of spacious and comfortable rest areas, and young groups will make camp in areas expressly devoted to them.

Beer & Other Specialities
In the Altmühltal Nature Park, you will find plenty of small and larger regional breweries with their own specialities. Obviously, they are produced according to the rigorous Bavarian purity regulations with ingredients of highest quality that grow right in this area. Here, each master brewer has his own recipes and secrets, from the oldest monastery brewery of the world in Weltenburg to local bio breweries.

In the Altmühltal Nature Park, variety characterizes the cuisine, too. Here, you will find specialities prepared with fresh ingredients from the region and traditional Bavarian recipes that can be savoury and substantial or light and delicate instead. Lamb meat is a regional speciality: during the summertime, herds pasture on juniper heaths and this kind of itinerant breeding makes their meat particularly delicate and tasty. This delicacy has been awarded with the quality certification "Altmühltal Lamb" (Altmühltaler Lamm) and is included in the menus of many gastronomic facilities in the region. In addition, in the Nature Park there are also specialities prepared with fish often caught at the moment. Obviously, also traditional Bavarian dishes such as pork shin, crispy roast and grilled sausages are served everywhere.

Christmas Time
Advent is the right time to discover the most romantic side of the Altmühltal Nature Park. In its towns and cities, streets are bathed with Christmas lights and booths framed by historical and Baroque buildings invite to stroll among arts and crafts and Christmas decorations. All around the smell of spicy sweet treats and hot-mulled wine pervades the air.

The Christmas markets of the region are also a wonderful place to meet and drink a cup of hot-mulled wine or punch in good company, and to taste the typical grilled sausages and traditional sweet treats. Here you have the possibility of purchasing handmade objects and regional products. The music of regional groups and bands makes the Christmas atmosphere even more magic. Many activities are dedicated to children, such as small do-it-yourself projects, baking the traditional "Stockbrot" (fresh bread dough rolled on a stick and then cooked directly in the fire) or tales reading. Moreover, St. Nicholas and the Christ Child always visit the Christmas markets and hand out small gifts to the little ones.