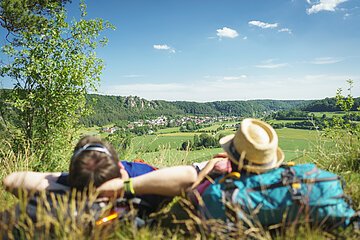 The Arnsberger Leite viewpoint stands out above all for its splendid landscape (one of the most beautiful of the whole of the Altmühl valley) and its botanical significance. Mighty dolomitic rocks alternated with sparse woods soar from meadows dotted with juniper bushes where sheep graze.

Experts consider its steppe moorlands the most interesting of the whole of the Altmühl Alb plateau. The species that grow here are mainly widespread in south-eastern Europe or south of the Alps.

On the slope, you can distinguish several plant communities: the semi-arid meadow mixed with different types of fat meadow covers the lower part, where humidity lasts longer. Going up the slope you find the real semi-arid meadow, where many thorny plants grow, e.g. the stemless carline thistle, or plants with leaves thickly covered in hair as the dense-flowered mullein, which is not cropped by sheep and can grow up to 2 m. Many types of broad-leaved marsh orchids are particularly noteworthy.

Going further up the slope you reach the area under the rocks, where the arid meadow shows free spots. Besides peculiar herbs like the blue hair grass and the blue moor-grass, also typical species grow here such as the germander, the spring cinquefoil and the bulbous butter cup. Rocks, rocky stages and rocky strips are home to a plant community called "rock steppe meadow" that is characterized by typical species such as the cheddar pink, the decorative mountain lettuce and the mountain alison. Other plants grow on this area, too: the rare yellow whitlow-grass, which is to be found only in colder lands, and the European feather grass that is one of the rarest plants of the Altmühltal Alb plateau and comes from the eastern steppes. It is located on a rocky terrace under the Yellow Cave ("Gelbe Höhle") and in June, during its blossom time, it is very showily with aristas long up to 30 cm.

Another cave opens in the middle of the rock face. It is accessible only to climbers and has been used by men from the first Bronze Age to the Roman times. Among the most significant finds discovered inside it there are fragments of human skulls, which suggest the offering of human sacrifices in ancient times. 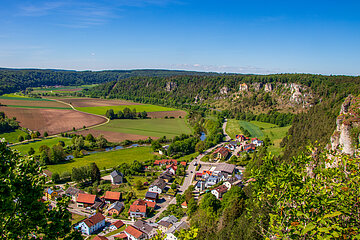 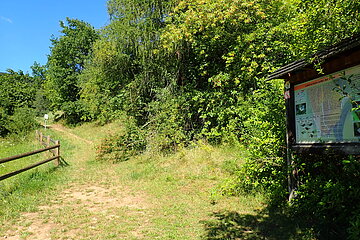 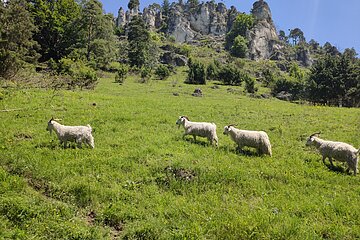 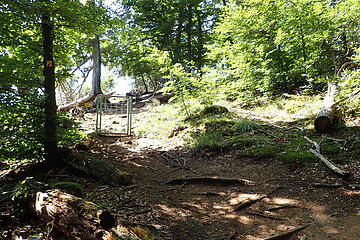 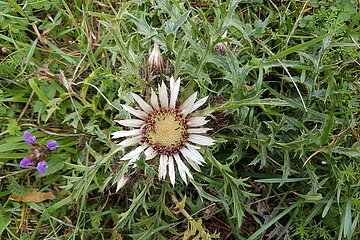 POSITION
The Arnsberger Leite viewpoint is located on the right of the Altmühl river between Arnsberg and Böhming.