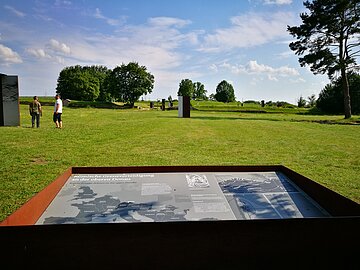 The castrum Abusina is located on the southern outskirts of Eining, directly on the road to Bad Gögging. In Roman times, the River Danube flew right here, where today the bed of the River Abens lies.

The castrum on the southern bank of the Danube hosted a cohort of 500 soldiers and since AD 80, it had the task to defend the border of the Roman Empire along the river. According to Roman strategy, the fortified military encampments were built behind the Limes. Actually, the wall ran at a distance of about 3.5 km as the crow flies to the north of this castell and since about AD 180, it made the Raetia province expand enormously. In case of an emergency, the soldiers stationed in the watchtowers signalled the threat to the encampments by means of smoke or light signals so that the soldiers in the castra could take all necessary defensive measures.

After the fall of the Limes, the River Danube became the new border of the Roman Empire, and the Romans had to abandon the castra encampments located north of it along the wall. Eining took on a special role as it lied on the Danube southern bank. Although the garrison settled there was reduced only to 100 soldiers at mid of the 3rd century, the fortified encampment hosted the troops assigned to the border protection until the fall of the Roman Empire (mid of the 5th century). Here the Cohors IV Gallorum, the Cohors IV Tungrorum milliaria equitata, the Cohors II Tungrorum milliaria equitata and the Cohors III Britannorum came one after the other. Moreover, the Legio III Italica rebuilt the castrum after the Marcomanni’s assaults and contributed enormously to the building of the legion encampment of Regensburg.

Aerial archaeology made it possible to evidence the presence of a vicus (a "warehouse settlement") to the west of the castrum. Today you can mainly see the rebuilt wall remains of the internal buildings and the perimeter defensive structure. The late Roman burgus is well discernible on the south-western corner. The rebuilt bath complex is located between the vicus to the east and the castrum, which also included a mansio (rest station). The boards called "time windows" at the archaeological site make visitors understand the significance of the Roman rule in Bavaria that lasted 400 years consecutively. 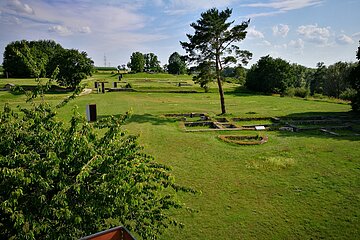 The area is always free accessible; donations are welcome.

POSITION
The castell lies some 500 m south of Eining directly on the road to Bad Gögging.