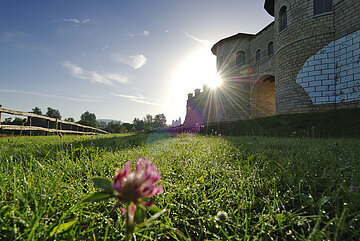 The fortified Roman castell of Weißenburg (in ancient times called castrum Biriciana) is located on a small rise over the stream Schwäbische Rezat on the western outskirts of the town, about 5.5 km to the south of the Limes.

Methodical excavations of the castell area on the western outskirts of today’s Weißenburg began more than a century ago after the foundation of the historical association "Weißenburger Altertumsverein" (1889). Between 1890 and 1913 it was possible to uncover and preserve the perimeter stone-built defensive structure with four doors, four corner towers and eight intermediate towers as well as a part of the inside buildings. At the beginning of the 1960s, interventions aimed at fully preserving the castrum were carried out according to the knowledge of the time. In those days, the castell belonged to the District of Central Franconia and passed to the City of Weißenburg on January 1st, 1996. Between 1986 and 1987, the City of Weißenburg decided the northern part of the castell area to undergo extensive archaeological excavations. The new discoveries made on this occasion complemented the results of former researches, also rectifying them in part. The two-year long excavations corroborated the hypothesis formulated a long time before that a wooden castell had existed here prior to the stone-built castrum.

These results were complemented by the study both of a still existing Roman gate complex and of some representations handed down since ancient times and by the standard of knowledge of those times about Roman defensive architecture. On this basis, between 1989 and 1990 it was possible to rebuild the northern gate under the scientific direction and specialized advice of the Bavarian Office for the Conservation of Historical Monuments. As in Roman times, also on this occasion they used hand-shaped limestone quarry stones from the surroundings.

Although it is not the largest of the original four gates of the auxiliary fortified castell, the northern gate is certainly located in the most beautiful position. It features two characteristic towers rounded to the outside, a 3.5 m wide passage and accessible guardrooms connected one to another by a covered corridor. The Romans had to adapt also to the local topography of Weißenburg and built their castell on a little hill over the stream Schwäbische Rezat. Those who came from the North were struck by this imposing castrum with its two gate towers and a defensive area of 32 m between the castell wall and the outer edge of the ditch… At least until the Alemannian assaulted it mid of the AD 3rd century.

The reconstruction of the gate complex of this military encampment successfully shows the massiveness of the Roman defensive fortifications, making Roman history tangible and accessible to everyone. 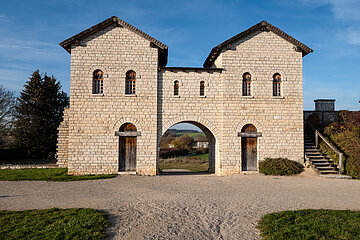 POSITION
On the western outskirts of the town near the railway station. The former Roman baths are located to the west of the castrum and can be reached on foot. Parking on the spot.

Show in the map