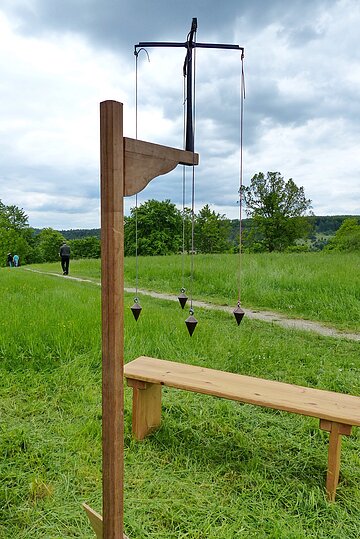 The Roman castrum Vetoniana is located over the village of Pfünz in the Altmühl valley. The auxiliary cohort stationed here was in charge of defending the nearby Limes. The castell was built towards AD 90. Today we see the reconstruction of its northern gate, a corner tower and a section of its defensive wall.

The castell stood on the Kirchberg (a 42 m high spiky hill over the Altmühl valley) to the south of today’s Pfünz and built a 2.75 ha-rectangle, which was 189 m long and 145 m large. The top of the Kirchberg had a commanding position overlooking three valleys, thus being an optimal strategical position where to build a castell.

A Roman Outpost on the Border of the Empire

The castrum was initially built with wood and earth under Emperor Domitian (AD 87-96). Then, the old castell was replaced with stone-made buildings and extended under Emperor Antonius Pius (AD 138-161) and Emperor Marcus Aurelius (AD 161-180) as the inscriptions found on some stone slabs witness to. Alemannian destroyed the castell towards mid of the 3rd century and caused the decline of the majority of the other Roman castells to the north of the River Danube.

Auxiliary Troops on the Limes

The garrison of the castell consisted of the Cohors I Breucorum, the first Breucian cohort. These auxiliary troops from Pfünz were a mixed unit that included about 480 foot soldiers (six centuriae), archers and men operating catapults as well as 128 knights (four turmae). Excavations has brought to the light a great number of weapons and objects belonging to the soldiers’ equipment. The garrison of the castrum was in charge of watching over the Limes located 15 km to the north, upkeeping roads and bridges, and maintaining peace and order along the border of the Roman Empire.

A Treasure of Coins from the Temple

A warehouse settlement (vicus) stood on both sides of the road to the south of the castell. Its most significant building was the temple to Jupiter Dolichenus, where a treasure of precious coins was uncovered. A civil settlement and a Roman bath complex were located in the valley along the stream of Pfünz. Today the many finds brought to light during archaeological excavations belong to the historical association "Historischer Verein Eichstätt". A part of them is on exhibit at the Museum für Ur- und Frühgeschichte (Museum of Prehistory and Ancient History) at the Willibaldsburg castle in Eichstätt.

An Insight into the Roman Times

The rebuilt guardroom of the tower of the northern gate gives an interesting insight into the Roman soldiers' life in the castrum towards AD 230. Here, you can see two soldiers full dressed up and equipped according to original finds and archaeological information. The educational trail on Romans ("Römerlehrpfad") at the castell explains the history both of the complex and of the warehouse settlement, and informs about the inscriptions on some stones (copies of the originals) of the fortified complex.

The Museum of Prehistory and Ancient History (Museum für Ur- und Frühgeschichte) at the Willibaldsburg castle presents the history of the regional development from the Stone Age to the early Middle Ages. Its highlight is the section with Roman finds coming mainly from the castrum in Pfünz. A large model of the castell with 500 small pewter figures takes visitors on a journey through time, back to the Roman times.

Among the finds that give an insight into Roman history and civilization in the region of Eichstätt there are many military objects, coins, stone-made objects and evidences of everyday life, such as jewels, pottery, tools, building materials and styluses). 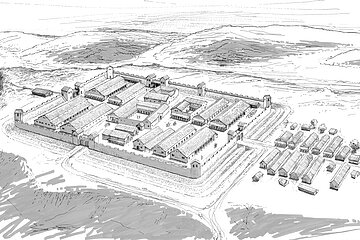 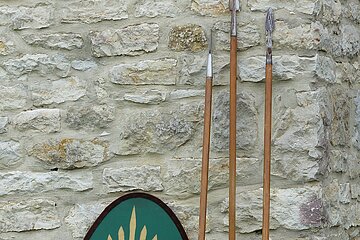 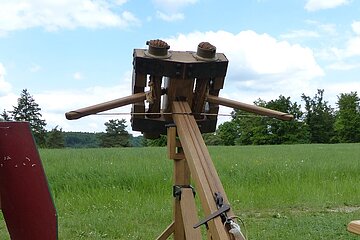 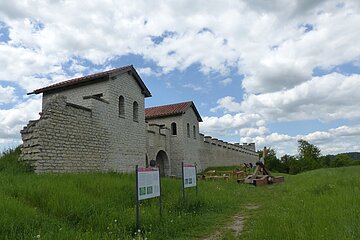 Free accessible
The rebuilt parts are not accessible in winter.

Information on the Limes in the Altmühltal Nature Park:
- Infopoint Limes at the "Römer und Bajuwaren Museum", castle of Kipfenberg
- Museum of Prehistory and Ancient History "Museum für Ur- und Frühgeschichte" 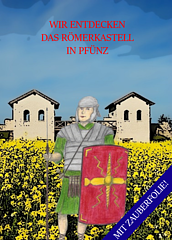 POSITION
The castell is located on a spiky hill over Pfünz. A narrow uphill road leads to a parking place in front of the castell complex. Please park big cars in the residential area, distance: 15 minutes on foot.