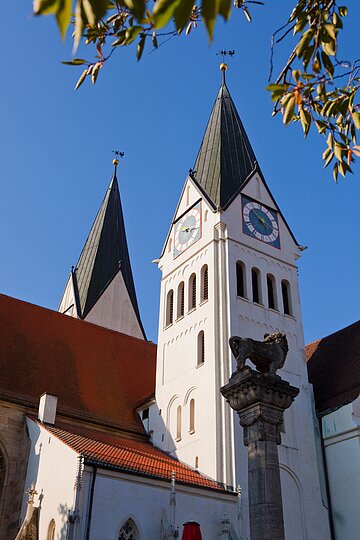 --- PLEASE NOTE note that only the cloister and mortuarium are open at present --- St. Willibald is thought to have built the first stone church here already in the 8th century. Today’s church goes back basically to the High/Late Gothic. In 1718 it was completed with a baroque façade by Gabriel de Gabrieli. Together with the double-naved cloister and the Mortuarium, the cathedral is one of the most important listed medieval buildings in Bavaria.

The Bishop’s Church and the Previous Churches

The Cathedral is one of Eichstätt's main points of interest thanks to its different architectural styles, its large number of works of art and St. Willibald’s relics.

If you reach Eichstätt old town from the bridge Spitalbrücke you notice the baroque west façade of the Cathedral immediately. It was built ahead of the high-gothic western choir and represents the most recent building stage of the bishop’s church. Moreover, it was the first work carried out by Gabriel de Gabriel in Eichstätt, who was destined to become a famous architect later on. The archaeological finds that are now exhibited mainly at the Diocesan Museum testify to the presence of the first cathedral built by St. Willibald in the 8th century. The only visible remains of the second romanesque cathedral are the lower wall of the gothic western choir and of the transept (that rises mighty among the towers and the longitudinal part of the building) as well as the two lower floors of the bell towers and the incorporated chapels. The longitudinal part of the church was built in high-gothic style in the 14th century. The main portal on the northern side gives access to the richly-furnished interior of the cathedral.

Works of Art inside the Church

The monumental statue of St. Willibald in sitting position (1514) that towers in the western choir (known as “Willibald’s choir”) is probably a masterly work by the famous sculptor Loy Hering. The relics of the diocese founder rest in the marble urn of the baroque altar embedded in the rear of the sculpture. Many votive pictures (17th century) in the Willibald’s choir refers to the Siboto Madonna of 1297 and testify to the devotion of the faithful of that time. Two of the grave monuments in the choir are worth mentioning: the first one was built for Bishop Johann Anton III, baron of Zehmen, in classicistic style and is made of marble and alabaster. The second one was made for canon Johann von Stain by Loy Hering on a project by Albrecht Dürer.

The modern monument in the northern transept reminds of Bishop Gebhardt I from Eichstätt, who led the Christendom between 1055 and 1057 as Pope Victor II.

Undoubtedly, the “Pappenheimer Altar” is the most famous work of art in the Eichstätt Cathedral. It is a 11 m-high altar rich in statues that was donated in 1489 by canon Kaspar Marshal of Pappenheim out of gratitude for his safe return from a pilgrimage to Palestine. The relief was skilfully carved in limestone and is divided into two parts: in the upper part the crucified Saviour is represented between the robbers, while in the lower part people crowd in huge masses with a disdainful imperturbability on their faces. Only a few of them show sympathy, too. A castle, the Dome of the Rock and the Church of the Holy Sepulchre are depicted in the background as well as the Doges’ Palace with the bell tower and the city of Nuremberg on the right.

The most worshipped statue in the Cathedral is the “Buchenhüll Madonna” on the southern transept pillar: this imposing work of art in the stile known as “Soft Style” stands out for the elegant form of faces and the robe folds. This statue had been hosted in the Buchenhüll pilgrimage church since 1430.

You enter the “Mortuarium” through a door between the southern tower and the chapel of the Blessed Sacrament. This double-naved room was built around 1500 and adapted as a burial place of the noble cathedral chapter. The “Winding Column” and the artistic “Beautiful Column” at the end of the column row are particularly remarkable. The well-preserved coloured glass pictures have been created on a project by Hans Holbein sr.

The late-gothic cloister is composed of four wings. The Mortuarium is its western wing. The eastern and the southern wings dating back to 1460/1470 were rebuilt in 1866, while the older northern wing (about 1415) has been preserved almost fully. 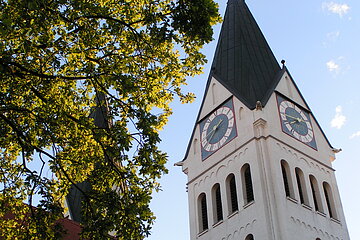 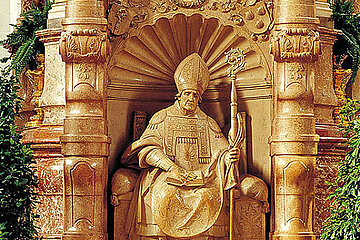 At present the Cathedral is undergoing restoration works and cannot be visited.
No visit is allowed during Holy Masses.

POSITION
In the heart of the town. Nearest car parking: Domplatz (fee).