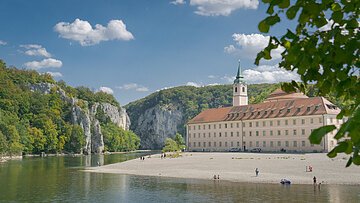 The Weltenburg Abbey is situated at the mouth of the romantic Danube Gorge. It was founded in the year 600 by the Iro-Scottish Columban missionary monks Eustasius and Agilus of Luxeuil (Burgundy), and is thus the oldest monastic settlement in Bavaria.

The abbey church, built and embellished by the Asam brothers from 1716-1739 under Abbot Maurus Bächl, is considered one of the highest achievements of European baroque. In the year 1803, Weltenburg fell victim to secularization and was disbanded. However, it was re-established as early as 1842 by King Ludwig I of Bavaria as a priory and settled by monks from Metten. Since 1913, Weltenburg has once again served as an abbey.

The community sees its primary task in parish pastoral counselling (the support of four parishes) and in the welcoming of guests. The St. Georg meeting place serves this task with an accommodation capacity of about 100 people. The adult education centre with boarding facilities of the Weltenburger Akademie e. V. offers a series of seminars in the realm of Catholic adult education. In addition, it organizes religious retreats and observance events. A further pastoral task is communicating the message of the Christian faith via architecture and art to the many tourists (approximately 500,000 per year), by providing guided tours of the church.

The abbey brewery and restaurant provide refreshment to tourists. Both businesses are leased to third parties. In addition, the abbey owns an agricultural holding. (Source: www.kloster-weltenburg.de)