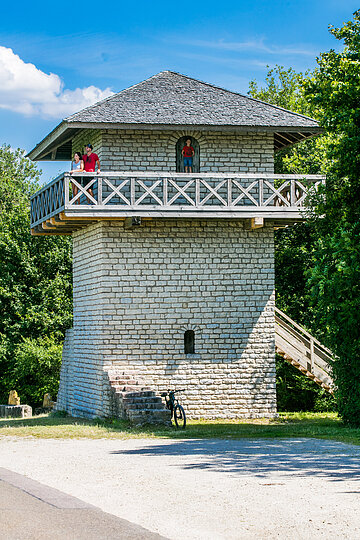 The Limes tower of Erkertshofen is the only reconstruction of a stone-built watchtower in all of Germany.

The erection of this three-storey building made of hand-shaped limestone quarry stones ended in 1992. The tower features an entrance on the first floor, an accessible circular balcony made of wood on the second floor and a pyramidal roof with wooden shingles. The ground plans of the other stone-built towers uncovered further to the east served as models for its reconstruction. The fact that there was no entrance on the ground floor suggests that it was possible to access the tower from the second storey by a (retractable) ladder.

The underlying ground floor was accessible only from the inside. It probably served as a storeroom for the foodstuff that was necessary to the four or five soldiers who were deployed here from the nearest castrum and spent a long guard duty in the tower. The first floor probably consisted of a common room used also as a dormitory. The second floor had a balcony with a wide view, where the soldiers were on duty. The balcony’s structure and its railing base on the representation of a Limes tower carved on the Trajan’s Column in Rome. 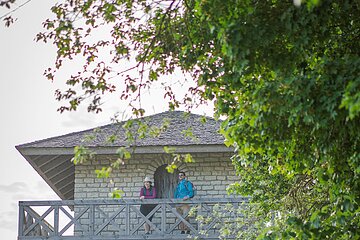 POSITION
East of Erkertshofen on the road to Herlingshard. Bus stop at Erkertshofen (500 m).
Car and bus parking