The Residence complex with its three large baroque wings is connected to the southern part of the cathedral. The magnificent staircase and the Hall of Mirrors inside the building are particularly note worthy.

The Residence was built by the prince-bishoply court architects of Eichstätt Jakob Engel, Gabriel de Gabrieli and Maurizio Pedetti. Martin von Eyb commissioned Jakob Engel to build a new residence where the “ancient court” stood. Its western wing was finished already in 1702. Gabrieli completed the building towards 1725 under Bishops Johann Anton I. Knebel von Katzenellenbogen and Franz Ludwig Schenk von CasteIl. In 1767-1768 prince-bishop Raymund Anton Graf von Strasoldo commissioned Pedetti the Hall of Mirrors and the staircase in the western wing. The ceiling frescos and the stuccos were carried out by Johann Michael Franz and Johann Jakob Berg respectively. Joseph von Stubenberg (1790-1802), the last prince-bishop, wanted the interior to be redesigned in classicistic style. The interior rooms were fitted in the Empire stile under the dukes of Leuchtenberg who reigned over the princedom of Eichstätt since 1817. When the Lichtenbergs’ possessions returned to Bavaria (1855), the building hosted at first a district court and a regional court (until 1944) and then a county court (until 1973). Since 1977 the former Residence has been the main seat of the provincial administration of Eichstätt. 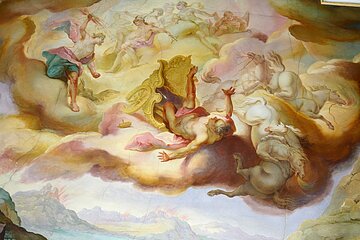 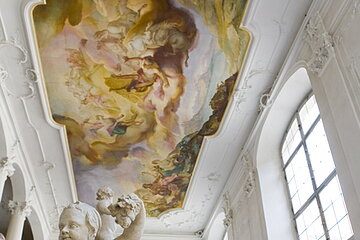 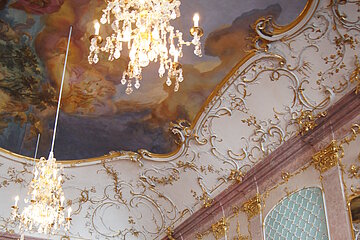 The Hall of Mirrors is open only for guided tours.

POSITION
In the centre of the town, on the Residenzplatz. Parking (fee required) right next to the complex.