The Prunn Castle is one of the best-preserved feudal castles in all of Bavaria. It is located near Riedenburg and towers above the Altmühl valley from the top of a 70 m-high rock. This complex is well-known both because of its Renaissance residential building and a manuscript of the famous German epic “Song of the Nibelungs” that has been found here.

The castle was first mentioned in a document dating back to 1037 and lived its golden age in the late Gothic under the Frauenberger von Haag’s family. This is testified to by the fresco fragments in the former guardroom and the manuscript of the “Song of Nibelungs” (what is known as “Prunn Code”) found in the castle. Now the original document is preserved in the State Library “Staatsbibliothek” in Munich.

The former way of living is presented by some living rooms such as the Ladies’ Hall and the kitchen. In 1827, King Ludwig I of Bavaria supported the conservation of the fortified complex as a historical monument and preserved it from impending decay.

Since May 2010 the castle shows all of its splendour thanks to a radical renovation that cost 3 Million Euros. 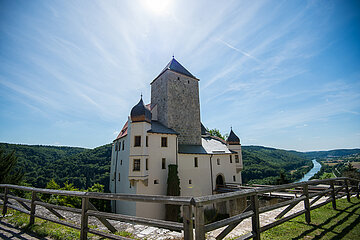 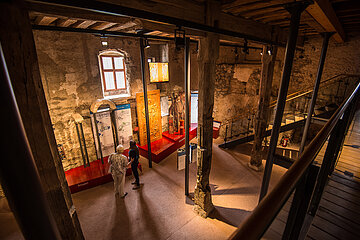 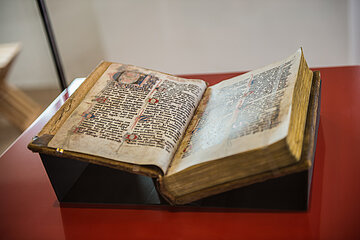 Free entrance for children and teen-agers up to 18 years, students (over 18) of general and professional schools as well as of schools for ill students

Attention: because of the COVID pandemy no guided tour takes place at present (visit on your own). It is compulsory to wear masks and keep the prescribed distance. Access is granted to a limited number of visitors only.

POSITION
Prunn castle is located on a 70 m-high Jura rock near the small town of Prunn on the Main-Danube-Canal. Car and bus parking is present near the castle, too. A steep footpath (about 1 km) connects the town centre to the fortified complex.