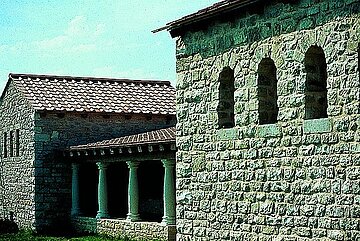 The Roman farm at Möckenlohe was excavated in 1993 in co-operation with the Bavarian Office for the Conservation of Historical Monuments and the Land Office for Non-Governmental Museums, and it was rebuilt over its original foundation walls. All finds uncovered here are on display inside the villa rustica.

Local legends had always narrated the presence of Roman ruins near Möckenlohe. In 1963, the farmer Michael Donabauer found remains of walls behind his farm. Since 1983, aerial archaeology made it possible to locate some buildings' ground plans very precisely under the cultivated land. The building of this Roman farm dates back towards the end of the AD 1st century. Its structure as well as many objects of everyday use and luxury goods testify to a certain wealth on the land behind the Limes. The villa was abandoned just before the Alemannian overrun the Limes in AD 233.

A Touch of Luxury
A hypocaust underfloor heating system, a massive smoothly plastered masonry, a beautifully shaped apse in the representative room of the villa and grilled windows with glasses are some of the elements that still testify to the civilization introduced by the Romans. Through a portico with columns in Tuscan style, you reach the eastern forepart of the main building; underneath it, there is a remarkably well preserved cellar. The existence both of the adjacent farm buildings and the bath is supported by documentary evidence, but their excavation has not yet been undertaken.

A Tangible Progress
The exhibited finds provide a valuable insight into the housekeeping and economy of the farm. They also make both Roman gastronomic culture (millstone, knives, ceramic dishes and storage containers) and work in the fields come back to life. Harness and horseshoes testify to the attention paid by the "farmer" to his horses, while corn grains and animal bones unveil Roman recipes.

Domestic Animals
In the Roman zoological park behind the villa rustica there are some animal breeds that have been raised by the Romans on our land, i.e. the Valais Black neck goat, the long-horned cattle, the Black nose sheep and the Fjord horse. These breeds have remained unmixed since ancient times. Therefore, their look perfectly matches with the representations of Roman reliefs and the well-preserved bones uncovered on the spot. 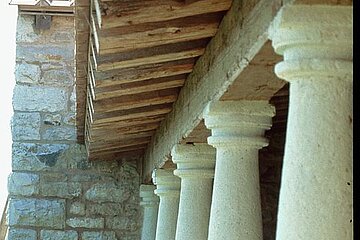 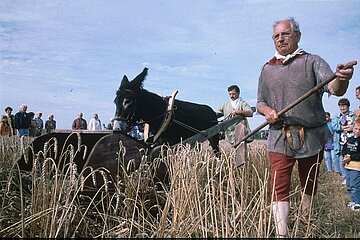 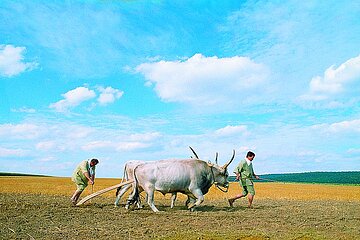 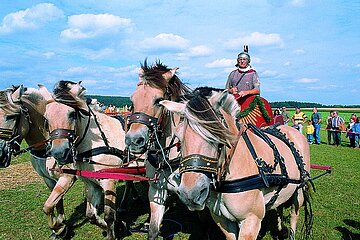 Palm Sunday to All Saints’ Day: upon request. 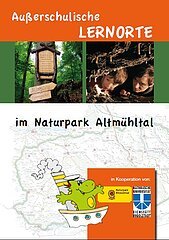 POSITION
Möckenlohe is a hamlet of the municipality of Adelschlag located near the ancient Roman road that connected the Roman castrum of Pfünz to the market town of Nassenfels (which today lies between Eichstätt and Neuburg a.d. Donau). Parking (also for buses) right next to the museum.

The "villa rustica" is included in the project "Außerschulische Lernorte" (Educational Sites Outside of School).