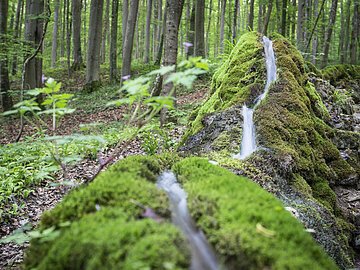 The stone gully ("Steinerne Rinne") located near Wolfsbronn (Meinheim) is a special nature's spectacle: the water from the spring in the wood flows downstream on a calcareous base that is 120 m long and up to 1.60 m high. It forms a "bank" that grows further every year.

The calcareous rocks of the Hahnenkamm region favour the formation of stone gullies because the limestone contained in running water deposits and forms elevations of the stream bed. Usually calc-tuffs are characterized by a flat form or large curvatures, while here a linear elevation follows the water flowing direction. Generally the erosive action of running water makes a stream sink in its bed, while in stone gullies the limestone settles and makes the stream bed higher. The stone gully at Wolfsbronn consists of a travertine bank that is 128 m long and up to 1.50 m high. Tuff settles on it and makes it grow further year by year.

If you visit this natural monument in April you can also see a lily family, which is peculiar to this area and is recognizable from a strong smell of garlic: it is the wild garlic that spreads on grounds rich in nutrients and flowed though by groundwater. It looks very much like big lilies of the valley. This almost forgotten plant is currently subject to a revival in gastronomy. 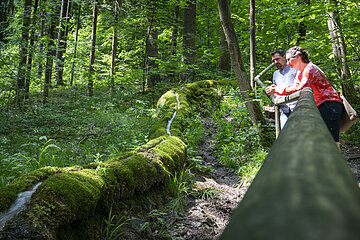 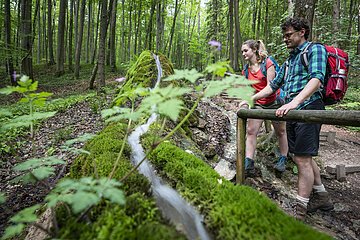 The stone gully is located to the southwest of Meinheim (a hamlet of Wolfsbronn) and can be reached from Treuchtlingen on the national road St 2230 towards Wettelsheim-Markt Berolzheim-Meinheim. In Meinheim turn into the road WUG 34 to Wolfsbronn.

Well-marked car and bus parking in the residential area and on the spot. The attraction can also be reached on the marked hiking and bike trail.

Bus service to Wolfsbronn through Meinheim. Distance from the bus stop: about 1 km.