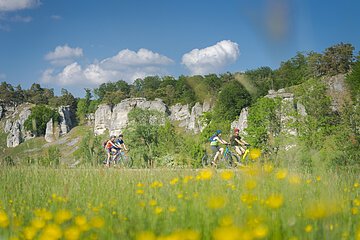 The "Twelve Apostles" rock formation is one of the most beautiful landscapes of the Altmühltal Nature Park. These mighty dolomitic rocks rise between Solnhofen and Eßlingen as they were greeting boaters on the river Altmühl, bikers on the Altmühltal Bike Trail and hikers that explore Solnhofen's surroundings.

From a geological point of view the subsoil of the "Twelve Apostles" consists of thick layers of Treuchtlingen marble, a stone typical of the White Jurassic. Peculiar geological structures called "calcareous rocks with sponges" developed in the marginal areas of the sea existing at those times and took the form of today's rocks after a severe breakdown process due to weathering.

This nature reserve of about 15,2 ha is protected since 1984 and in 1988, a specific plan was launched in order to promote its preservation and development. Its vegetation is structured in two different complexes: on the stratified limestone there are wide semi-arid meadows (arid calcareous meadows), which turn gradually into sparse pine and juniper woods. In addition, on a small area on the upper part of the rocky towers, characterised by ledge and crevice complexes, there is a patchwork of arid heathland-looking meadows. The sheep-farming practiced for centuries on this area brought about the development of a new biotic community of plants and animals. At the beginning, the surfaces that today host both semi-arid and juniper-spotted meadows were covered mainly by mixed beech and oak woods. Here herds of sheep and goats have been brought for grazing since the early Middle Ages. In the course of time, shrubs' elimination through herd's grazing and the human activity of tree falling for obtaining both firewood and timber facilitated the diffusion of a kind of flora and fauna that prefers light and warmth.

Most of these species with specific environmental requirements came to the middle Franconian basin from the Mediterranean region and the southern European steppe lands. Some species typical of oligotrophic grasslands are the rock-rose, the Carthusian pink, the Pasque flower, the branched St. Bernhard's lily, the violet helleborine, the wall germander and the mountain germander.

Some animal species have adapted to living in this place and its extreme site factors. Among them there are trophic-specialized species such as the dung beetle and many arts of flies, sapsuckers that eat young shoots such as cicadae and species that have adapted to local dryness, e.g. Lycaenid butterflies and grasshoppers of different species. In the past, the wonderful Apollo butterfly was an endangered species, but thanks to the special preservation measures implemented here it has settled down again in this region as an endemic species.

The traditional semi-permanent sheep-farming and the landscape conservation measures adopted specifically for this territory since 1974 (mowing and shrub removal) enable to preserve its peculiarity and plentiful of species. 187 rare and protected plants included in the Red List of endangered species have been censussed on areas with arid meadows and grassy Sub-Pannonian formations.

The multiple award-winning hiking tour ʺAltmühltal-Panoramawegʺ, which is very popular among hikers, leads to the highest part of the slope that overhangs the "Twelve Apostles" rock formation. From here, you can enjoy a wonderful view of the Solnhofen valley. 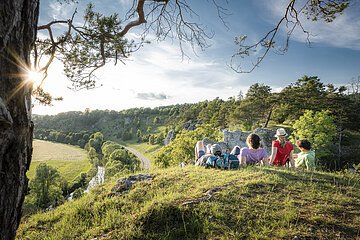 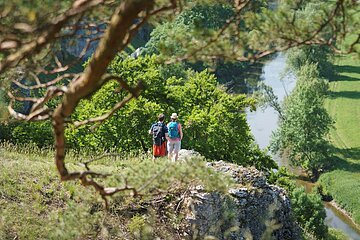 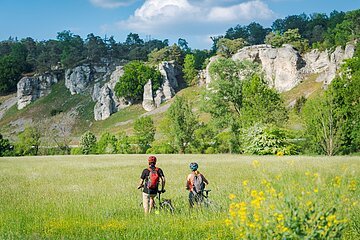 On the northern slope of the valley between Solnhofen and Eßlingen. Coming from the national road B 2 turn left near Dietfurt (Treuchtlingen) into the national road St 2230 towards Pappenheim-Solnhofen-Eßlingen (touring route "Deutsche Ferienroute Alpen-Ostsee").

Car parking in Eßlingen along the Altmühl river. 2 km far from Solnhofen along the hiking trail Altmühltal-Panoramaweg over the residential area or along the cycling route Altmühltal-Radweg towards Eichstätt to Eßlingen (following the directional marks).