Attention! Some parts of the castle are undergoing restoration works at present. It is not possible to reach the castle by car and park there. The castle inn is closed. At present visitors can access the museums and the botanical garden from the Mondscheinweg road.

The castle complex was built by Bishop Berthold burgrave of Zollern in 1355 and has been an Episcopal see until 1725. In the following centuries, the Willibaldsburg was extended by different bishops and became a representative residence in the 17th century. In 1633, the castle was conquered by the Swedes, who lost it later on in the same year. The only parts of the original 420 m-long fortified structure still present today are its walls, its bastions, the arsenal, the 63 m-long triumphance hall and the building called “Gemmingenbau” with its two towers. The northern wing of this building hosts the “Jura-Museum” with the well-known fossils from the limestone-slabs in Solnhofen. Its southern wing is home to the Museum of Prehistory and Ancient History “Ur- u. Frühgeschichtliches Museum”. In 1998, the “Bastion Garden” was built on the Schmiedbastion with plants of the famous “Hortus Eystettensis” botanical garden.

The history of the Willibaldsburg castle begins in the middle of the 14th century.

Towards 1355 Burggrave Berthold of Nuremberg (45th Bishop of Eichstätt) began to build a castle on the mount of St. Willibald. The position of the first castle was destined to be determining for the whole history of the Willibaldsburg that was extended and reinforced by Bishop Berthold’s successors.

The most ancient image of the castle is to be found in the “Chronicle” by Hartmann Schedel dated 1493.

Bishop Martin of Schaumberg (1560-1590) carried out the first crucial phase in the radical renewal of the fortified complex to the east of the transverse connecting wall. Today the shape of the castle is characterized above all by the building works wanted by Johann Conrad of Gemmingen (1595-1612). In fact, the 58th bishop of Eichstätt entrusted the architect Elias Holl of Augsburg with the project of a new castle and the master builder Hans Alberthal of the direction on the spot. The bishop also owned a famous botanical garden laid out by the chemist Basilius Besler of Nuremberg on the fortification around the castle. The plants that flourished there were then copper-engraved resulting in one of the most famous herbal ever with over 1,000 illustrations. Unluckily Bishop Conrad of Gemmingen died in November 1612; therefore he could see neither the finished herbal nor the completion of his castle.

He was succeded by Bishop Christoph of Westerstetten (1612-1636). He extended and reinforced the Willibaldsburg by building the Schellenberg and Schmied bastions and protecting the new main entrance by a new deeper trench with a drawbridge and a huge entrance passage.

The Thirty Year’s War was a difficult time both for the city of Eichstätt and the Willibaldsburg. On 26th April 1633, the Swedes under Bernhard of Weimar reached the castle and beleaguered it from May 4th to May 13th. Then they managed to enter through a breach in the curtain wall and conquered the castle. On 23rd October 1633, the imperial troops under Johann of Werth recaptured the Willibaldsburg. The following bishops repaired the damages suffered during the Thirty Year’s War and built the bastions towards the “deep valley”.

When the building of the Residence at Eichstätt was completed (1725), the prince-bishop’s court moved to the town and the Willibaldsburg lost its function gradually. The bare essentials were budgeted for its maintenance as the fortified complex still hosted administration offices, the chancery, the archive and the library, as well as troops and several handicraftsmen.

Between 1784 and 1810, the buildings in the Schellenbergbastion were used as a prison. In 1802, the secularization led to the dissolution of the ecclesiastical principality. The new sovereigns plundered the Willibaldsburg and then sold it to privates in 1806. The Willibaldsburg was destined to be demolished. In 1829, the War Ministry repurchased the castle and began refurbishing it by rebuilding its ruined parts.

Between 1855 and 1873, the Willibaldsburg was used as a barrack and became a war prison camp for French soldiers. In 1880, the city of Eichstätt purchased the complex and the Historical Association endeavoured for saving and preserving the castle. In 1866, it created a local history museum in it.

In 1900, the State purchased the Willibaldsburg, which hosted French prisoners once again during World War I. In 1962, the Bavarian body “Bayerische Schlösserverwaltung” responsible of castle administration took over the fortified complex. Since then, it is undergoing wide restoration works. 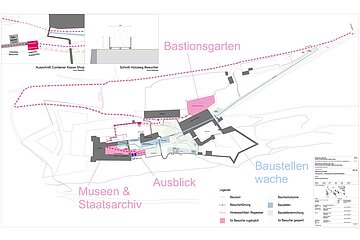 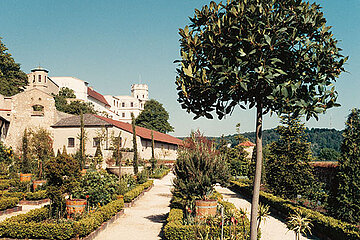 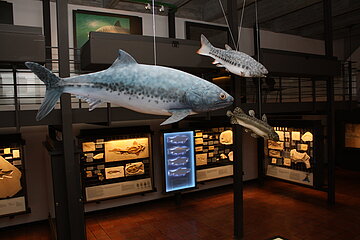 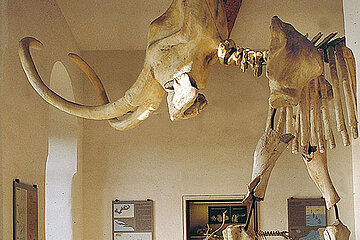 POSITION
You can reach the castle following the road and the walking path that leave the main road B13 and go up the hill to the west of the centre.
Bus parking facilities: during the weekend on the parking space of the school “Berufschule” in Eichstätt (about 150 m below the castle gate); during the week only on the bus parking “am Freiwasser” - passengers get off close to the castle gate.