The primeval bird Archaeopteryx and other fossil “stars”

147 million years ago today’s Altmühltal region was in the middle of a subtropical lagoon. Ammonites, predatory fishes and crocodiles populated the Jurassic sea. Dinosaurs lived on the dry land while pterosaurs, delicate dragonflies and bird ancestors dominated the sky.

Once dead, many of these animals sank in the lagoon and their bodies were hermetically trapped in the sea bottom mud. Over time, fish shells and bones, dinosaurs and plants fossilized, were pressed in limestone slabs. The “original inhabitants” of the Altmühltal region came back to the light of day after millions of years. More than 900 different species of animals and plants have already been uncovered in the Altmühltal Nature Park.

This fossiliferous region is world-famous as “homeland of the Archaeopteryx”: actually, all of the fossils of the so-called “primeval bird” have been found in the Altmühltal Nature Park only. 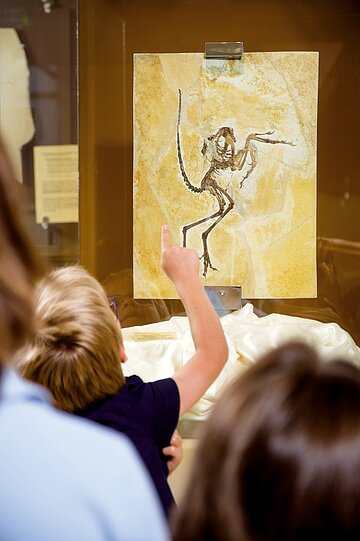 In 1860, an extraordinary fossil was found in Solnhofen: the imprint of a feather dating back to the Jurassic. This was the first evidence of the “primeval bird” Archaeopteryx. Within a short time, complete fossils were uncovered, too. They made clear that the Archaeopteryx has had features belonging to both dinosaurs and modern birds: therefore, it is the link in the evolutionary chain between the two species. Until now, this fascinating animal has been found in the Altmühltal Nature Park only. Besides the feather, only 12 Archaeopteryx specimens exist in the world: one of them can be admired at the Jura-Museum in Eichstätt while other three are exhibits of the Museum in Solnhofen.

Since 2016, another specimen is displayed at this museum: it is the Archaeopteryx “No. 12”, which is definitely a sensational fossil - it is the last specimen in chronological order and geologically also the oldest Archaeopteryx among the 12 specimens that have been found until now. Today it can be admired at the Dinopark in Denkendorf.

Another spectacular fossil of the Altmühltal Nature Park has been found in Painten, near Riedenburg: a 72 cm-long baby predatory dinosaur that is about 135 million years old. This fossil is extraordinary well preserved as even its skin and parts of its fur are intact. Only a few of such complete dinosaurs have been found worldwide, therefore it is a truly sensational found. This Theropode (predatory
dinosaur) named “Xaveropterus” is a relative of the well-known Tyrannosaurus and now it can be admired at the Museum in Solnhofen. 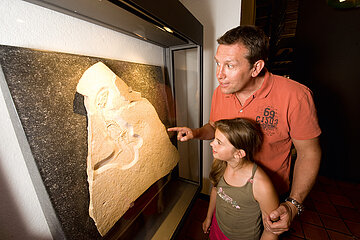 Found by Klaus-Dieter and Hans Weiß in 1998 in Schamhaupten, the Juravenator has been uncovered with a painstaking work and has been studied over many years by Luis Chiappe and Ursula Göhlich (Natural History Museum of Vienna). It was presented to the public in 2005 and today it can be admired at the Jura-Museum in the Eichstätt castle Willibaldsburg. This 65 cm-long fossil belongs to a young specimen, but it is impossible to know the dimensions it could have reached as an adult: in fact, it is the only exemplar of its species that has ever been found. The find of the Juravenator starki is extremely important, because it is considered the best-preserved carnivorous dinosaur in Europe. 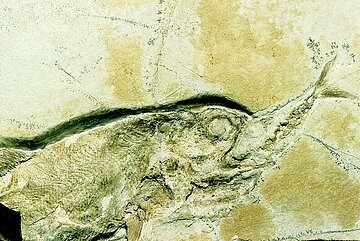 Among the exhibits of the Museum Bergér you will see a very remarkable fossil: the “Caturus”, a predatory fish that has died while swallowing its prey and has sunk in the sea bottom mud. 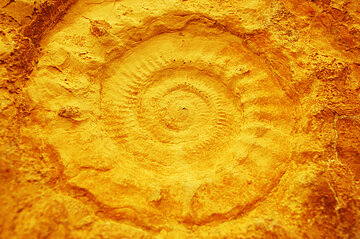 Obviously, there is also the “Ammon’s horn”, better known as ammonite. This fossil has been chosen as the symbol of the Altmühltal Nature Park. The ammonite specimens feature different sizes ranging from the dimension of a fingernail to that of a loaf of bread.